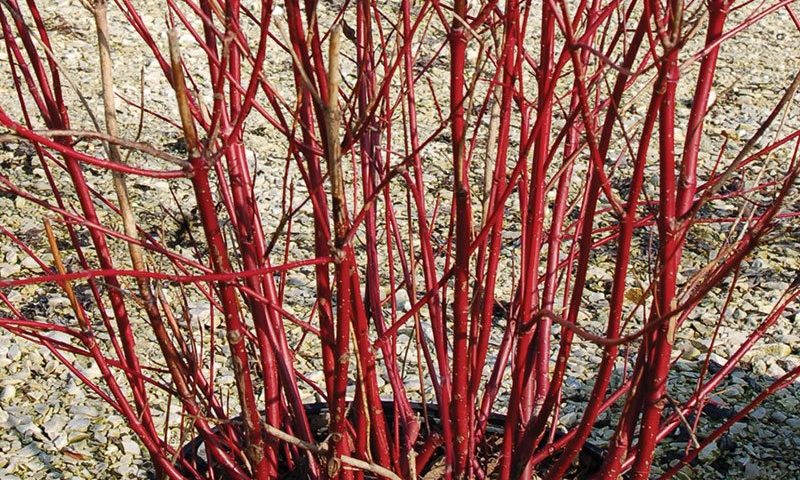 Featured Image: Cornus sericea, Redosier Dogwood
**If you are unsure if this method is best for your plant, search for your plant here in our knowledgebase and scroll down to the maintenance section within the plant's profile.**

When should you prune?
- Annually or as needed
- Pruning occurs in very late fall, winter, or very early spring
- When the plant is dormant or just prior to bud break
- Warning: Some spring blooming shrubs set their flower buds after they bloom - thin after flowering
- Do not prune in late summer or early fall because the new growth will not fully harden off before winter

In general, thinning cuts are very beneficial and easy to do for most shrubs. The best way to identify a shrub that needs thinning cuts is a multitude of branches at the ground level. Thinning cuts allow more air circulation through the plant and make branching patterns more visible.

This style of pruning allows the shrub to maintaining its form while encouraging new growth. Thinning is just what it sounds like; removing the oldest, heaviest canes at the ground line. For canes that are smaller than your thumb, a pruning shears may be used. Any branches larger than your thumb should be removed with a pruning saw or Lopper for your safety and for the benefit of your equipment.

In most cases, thinning should be made when the plant is dormant or just prior to bud break, usually in March or April, although it can be done anytime during the dormant season (late fall through early spring). Pruning during the dormant season means that the plant has fewer branches to focus energy on during the growing season. Warning: Pruning after bud break and into the growing season is ill advised. Most plants will struggle to heal over the pruning cuts and may not respond as vigorously.

Some shrubs should only be thinned after flowering, such as Forsythia. Some spring blooming shrubs set their flower buds after they bloom. If you prune before they flower, you are essentially cutting off all the flowers! This is true for Forsythia and Lilacs.

Normally you should only have to remove a few canes per year. Generally 1/3 of the canes should be removed (ie. If there are 9 canes, 3 may be removed). Some common shrubs that respond well to thinning cuts are Dogwoods, Chokeberry, Winterberry, Ninebark, Willow, and Sumac to name a few. These species all have thick bases with a multitude shoots. On shrubs that have only a few main branches, thinning is not recommended. Examples are Burningbush, Corneliancherry Dogwood, and Common Witchhazel. Search for your plant in our knowledgebase to see what we recommend.