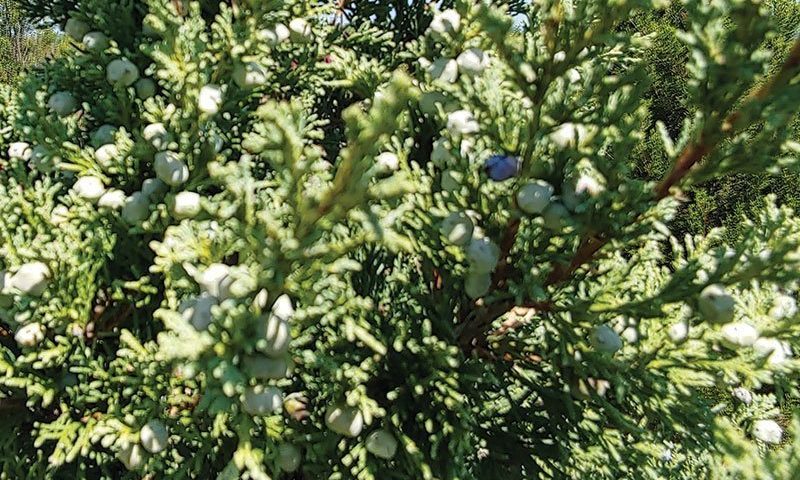 Trautman Juniper is one of our favorite Juniper selections. Selected by the late Herbert Trautman for its compact size and coarse texture, this evergreen is a great choice for tough sites or those with space restrictions. Berry-like cones in fall add winter interest and attract wildlife to this four-season plant. May also be known as Trautman Chinese Juniper.

When our propagator Ben French was asked to share some facts about Trautman Juniper, he replied with these three words: “Durable, beautiful, adaptable.” And frankly, we don’t know a better way to put it. Trautman Juniper is a versatile plant in the landscape. Individually it makes a striking vertical accent that is unique from any angle. While not as perfectly symmetrical as a Taylor Juniper or Emerald Arborvitae, the craggy aesthetic of Trautman Juniper gives a rugged yet refined feel to any planting. It’s also good for a screen or border. The plant won’t be as bushy as the aforementioned alternatives, but it will provide enough visual obstruction to serve its purpose.

The greatest utility of Trautman Juniper is its narrow spread and compact height. Where a full-sized Juniper or Arborvitae may be too wide, Trautman Juniper can comfortably fit between driveways or structures and sidewalks. Add its salt and pollution tolerance and you’ve got a plant that’s prime for tough urban sites. If you have 6 hours of direct sunlight per day and the plant doesn’t remain in standing water, Trautman Juniper is an ideal choice for difficult, restricted sites.

Personally, our favorite use of Trautman Juniper is either singly or grouped in beds, individual plantings, or as a component of a mixed screen.

Trautman Juniper is not as beneficial to wildlife as our native Eastern Red Cedar or Oldfield Common Juniper and won’t support as many species as a native plant. That doesn’t mean however, that Trautman Juniper (and other Chinese Juniper cultivars) are ecologically useless. They still provide habitat to birds, the ‘berries’ (again, not technically a fruit since it’s a modified cone) are food for wildlife, and orb weaver spiders love to make their ornate webs between the branches.

(Note: this plant is not a spider magnet so don’t be afraid to plant it if you’re creeped out by them. I just think spiders are neat. If you want a spider-free landscape you’re going to have to live in the tundra, on a mountaintop, or at the bottom of the ocean.)

Due to its spiky foliage, Trautman Juniper is not prone to damage from rabbits or deer. Even if a deer does decide to nibble on your juniper, you can at least rest easy knowing they hated every second of it.

Water deeply the first year to establish a healthy, resilient root system. Once established, Trautman Juniper is drought tolerant and requires minimal care. Maintaining a healthy 3” thick mulch around the tree can negate the need for watering entirely depending on your soil. Not to mention it looks nice!

Trautman Juniper does not require wrapping or winter protection. If winter burn is a problem (highly unlikely but not impossible), consider watering later into fall to ensure the foliage is hydrated.

Fertilization is not necessary and may even be counterproductive for this plant. Excessive fertilization will cause excessive growth and make the plant weaker. Keep in mind that the faster the plant grows, the sooner it will conflict with other plants or structures. Instead, water when needed and enjoy the plant for what it is.

We have seen some examples of Trautman Juniper that are sheared and do not recommend it. This tends to make the plant look “thicker” and more columnar at the expense of its unique character. We say “thicker” in quotations because you don’t really get that much extra screening or density – it just has a more symmetrical habit. If you want something that’s columnar you should be picking a different plant like the previously mentioned Emerald Arborvitae or Taylor Juniper.

When sited properly there are rarely issues with Trautman Juniper. Usually, damage is the result of poor drainage, mechanical damage from people and animals, and/or lack of sunlight.

Trautman Juniper is not disease prone but there are several pests and problems that can damage an already stressed plant. Not all of these are fatal, and some are unavoidable with time. The following information shouldn’t be viewed as a litany of failures but as information for a responsible grower. Remember, there’s no such thing as a perfect plant that is disease-free!

Rusts (Gymnosporangium) are probably the most significant fungal disease of Juniper. Juniper acts as an alternate host for this fungus, which completes the other half of its life cycle on a variety of plants in the Rosaceae family. These include Serviceberry (Amelanchier), Apples (Malus), Hawthorns (Crataegus), Pears (Pyrus), and more. Usually, the damage on Junipers is limited to a few galls. Occasionally twigs may die back but these can be pruned. The damage is more pronounced on those alternate hosts and can cause unsightly foliage damage or weird growths on fruits.

Before you write off Juniper as a landscape plant due to rusts, let’s take a moment and reframe. Most references to Gymnosporangium management recommend to “avoid planting Junipers in close proximity to primary hosts.” This makes sense; if the fungus needs two plants to grow on, why not take out the common denominator of Juniper being the alternate host? Well, if you do a little digging, you’ll find that “close proximity” usually means ‘kill every Juniper within 1-3 miles of your planting location.’ This is the nuclear option that’s usually reserved for large-scale apple production. Unless you live on a 640+ acre lot AND you’re planting your apple/hawthorn/pear in the center of the lot AND you’re sure that there are no junipers on your property, you’re probably going to have rust at some point or another. And even if you don’t have any Junipers on your property, chances are your neighbors are going to plant one. The good news is that the damage on both hosts is usually negligible unless you’re heavily investing in fruit production – in which case, you’re probably already spraying your fruit trees for fungal diseases.

So, in conclusion to this long-winded diatribe on the non-issue that is Cedar Rust, you don’t have to worry about damaging your Crabapples, Serviceberries, Hawthorns, etc. by planting a Juniper. Should you plant a Juniper right next to your susceptible plant? Probably not. But if you’re putting them on opposite sides of the house or one in the backyard and one by the driveway, you’re likely not going to have an issue.

Now, aside from Rusts, there are a few other diseases that can attack Junipers if they’re in areas with poor airflow or constantly soggy soil. These are Phomopsis Tip Blight, Kabatina Tip Blight, and Abiotic Tip Blight. These diseases cause tips to brown in early spring or late winter and can progress inward if left unchecked. Phomopsis and Abiotic Tip Blight are caused by stress on the plant and are usually comorbid with overhead irrigation/sprinkler systems. In these cases, pruning the affected branches in winter and treating the plant with a fungicidal spray in spring can do the trick, but you have to increase airflow and reduce the moisture on foliage to prevent the disease from persisting. Kabatina Tip Blight has similar symptoms that show up a little earlier than Phomopsis in late winter. Kabatina differs from the other blights in that it usually needs an open wound to spread; therefore, pruning should be completed in winter as this will prevent spores from moving within the plant.

Trautman Chinese Juniper was selected by the renowned breeder Herbert Trautman. It’s found a home in the gardens of many professionals due to its refined form and resilience.

Although Junipers perform best in acidic soil, they make the surrounding area more alkaline over time. This is because their foliage (and fruit) contains a large amount of calcium. Over time, the calcium deposition from seasonal needle drop can make the surrounding soil more alkaline. For you, this means you should avoid planting acid-loving plants below/around Junipers.

Juniper berries have been used as a seasoning and flavoring for millennia. From the classic German Sauerbraten to the refined botanical bouquet of gin, these small fruits (which are technically cones if I’m being pedantic) are noted for their peppery taste. Common Juniper (Juniperus communis) is the species most frequently used for spices and gin as it’s the most intensely flavored. It’s also the most widely distributed species as well, but you’ll have to read more on that in its plant profile.

While other species of Juniper may not have the flavor density (is that a thing? If it isn’t, you heard it here first!) of Common Juniper, that doesn’t mean they aren’t useful in the kitchen. However, Savin Juniper (Juniperus sabina) and Cade Juniper (Juniperus oxycedrus) are at best inedible (and at worst poisonous). Thankfully, Cade Juniper doesn’t grow around here so you can scratch it off your list of “plants that are passively trying to kill me.” Juniperus x pfitzeriana, a hybrid between Chinese Juniper and Savin Juniper, is also unsafe. There are mixed reports on our native Eastern Red Cedar (Juniperus virginiana). We haven’t found a definitive answer on whether or not Chinese Juniper is edible; however, we also haven’t found any references that outright state that Chinese Juniper is inedible. A conservative assessment is that your safest option is to stick with Common Juniper as we know it’s non-toxic – but you be the judge.

Plants that require consistent moisture or are intolerant of alkaline soil should be avoided as they aren’t compatible with the juniper’s site preferences.