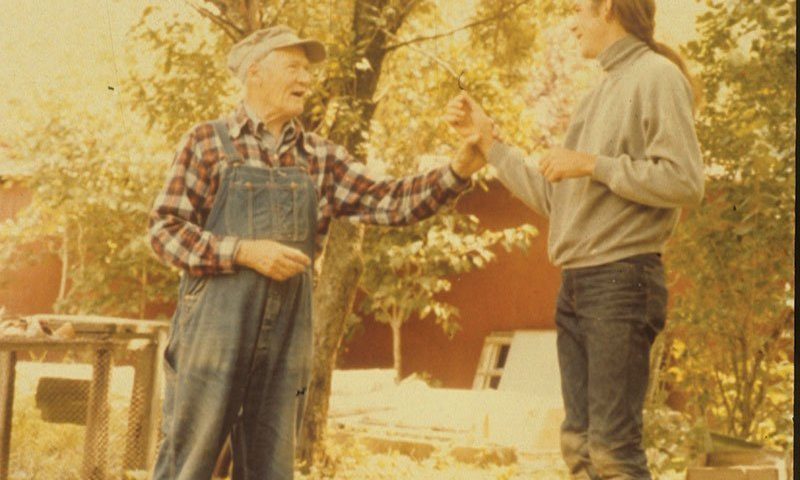 The Legacy of Herbert F. Trautman at Johnson’s Nursery

Herbert F. Trautman, has long been an important part of Johnson’s Nursery. Herbert influenced both Clark Johnson, the founder of Johnson’s Nursery, and his son Wayne Johnson, who built the nursery into a thriving business from 1970 through the ‘90’s. Herbert inspired Clark with his grafting skills and they shared ideas about techniques and propagation procedures. Later, as Wayne grew the business, he used Herbert Trautman as his ‘go to guy’ for advice on nursery operations and selection of plant materials, among other things.

In the spring of 1977, I was hired by Herbert Trautman as an intern at his nursery where he taught me the many propagation and plant selection skills I would later use throughout my career. Based primarily on his recommendation, I was hired by Johnson’s Nursery in 1980 at 23 years of age to start a propagation department. Without Herbert Trautman’s support, I would likely have never been hired nor would I have been able to build a propagation department at such a young age.

Johnson’s Nursery (heck! The entire green industry in Southeastern Wisconsin) owes a great deal to Herbert F. Trautman. I personally will be forever grateful to him for taking me under his wing and teaching me not only about plants but also about life and how to become a good person.

Following are a few other living legacies of Herbert’s, namely his plant selections. I am very proud to tell you about these little known gems and their associated stories.

This arborvitae cultivar was selected in 1946. Herbert picked it out of a crop of Thuja occidentalis seedlings. The winter of 1945-46 was a severe one. It caused arborvitae plants to severely burn throughout the Upper midwestern part of the United States. His selection was unscathed. He said that the weather induced damage to the plants made such a severe impression on consumers that for many years later he could not readily sell arborvitae. People were afraid to plant them. So even though Herbert had his new non-burning cultivar, ‘Trautman’, it was difficult to sell.

At the same time that Herbert had made his arborvitae selection his friend, Brother Charles Reckamp of Mission Gardens, made a similar selection at his nursery in Techny, Illinois. His plant was named Thja occidentalis ‘Mission’, ‘Mission’ Arborvitae. In later years, the name Techny Arborvitae was used for the same plant and it became one of the most popular evergreen cultivars in the history of landscaping in the upper Midwest. Like the Trautman Arborvitae, Techny languished in Brother Charles’ and Herbert’s nurseries for about 15 years before the plant became popular in the 1960’s. Trautman Arborvitae never caught on and still hasn’t, even though it is a fine plant.

Trautman Arborvitae is a standard sized plant getting 20-25’ tall on average and 10-15’ wide. The plant has very good density and is not as loose growing as Techny Arborvitae or even Dark Green, Thuja occidentalis ‘Nigra’. Trautman Arborvitae has somewhat glossy foliage, which readily distinguishes it from most other cultivars. Most importantly, it is very tolerant of open, dry fall and winter seasons when many cultivars may desiccate or burn, showing brown foliage in the late winter. Our nursery recently discontinued growing Dark Green, Thuja occidentalis ‘Nigra’ because of the superiority of the ‘Trautman’ selection.

Perhaps the greatest contribution Herbert Trautman made to the world of horticulture as far as plants go, would be his work with Pines. He was instrumental in popularizing the cultivars Weeping White Pine (Pinus strobus ‘Pendula’) and Waterer Scot’s Pine (Pinus sylvestris ‘Watereri’) in Southeastern Wisconsin. He grew selections of Pinus flexilis and Pinus puece as well as several others. However, Swiss Stone Pine (Pinus cembra) is the Pine that is most commonly associated with him. All of the Trautman Swiss Stone Pine selections are especially good looking when the fresh new growth appears in spring. The new shoots have a fuzzy brown pubescence that resembles Staghorn Sumac twigs in the winter. This is the easiest way to distinguish Pinus cembra from other species of Pine. Herbert made four cultivar selections from this species. All came from a single crop of about 300 seedlings that he propagated from seed sometime in the 1940’s.

The largest of the Trautman Swiss Stone pine selections is ‘Big Blue’. A 45 year-old plant in my yard is 27’tall and 12’ wide. It was selected for the bluish tint to its foliage. The tree has a better density than the average Swiss Stone pine seedling. The plant prefers a rich, well-drained soil with a pH leaning toward acidic. However, it has tolerated slightly alkaline soils in our nursery. We typically try to keep the alkalinity in check by treating the soil around our Swiss Stone Pine with regular applications of granular sulfur. Heavy wet soils will cause plants to go off color and grow much more open.

Similar to Short Stuff in density and habit but taller. A 45 year-old ‘Tip-Top’ in my yard is 20’ tall and 7’ wide. This would be the best Swiss Stone Pine to use if you wanted to get a screen quickly but you didn’t want it to make too big of a footprint in your yard. The Swiss Stone Pines are native to the high elevations of the Alps in Europe. They are hardy to zone 3.

‘Twister’ is an intermediate sized plant. A 45 year-old plant in my yard is 27’ tall by 9’ wide. It gets its name from the distinctive twist each bundle of bluish-green needles has. Twister has very good density and a pleasing growth rate.

Of all the plants Herbert Trautman selected, this is my personal favorite. Herbert picked this plant from a crop of open pollinated Juniperus chinensis seedlings. Trautman Juniper has a wonderful, narrow, upright habit that makes it very useful as an evergreen screen which will not infringe greatly on the living space of a small yard. It is one of the best of all upright junipers for this purpose. The plant grows to about 12’ tall and 4’ wide in 20 years. It is a prolific producer of ¼” diameter, silvery-blue juniper berries that show nicely against its darker blue-green foliage. ‘Trautman’ maintains its beautiful foliage color throughout the winter. It is one of the few upright junipers that can be rooted from cuttings, so grafting is not absolutely necessary. I have never seen deer browse damage on this plant. It is resistant to phomopsis blight which commonly makes Juniperus scopulorum cultivars brown out and become ugly.

The Trautman plants are all excellent selections. There isn’t a wimpy plant among them! Herbert didn’t select anything that wasn’t as ’tough as nails’. That’s why, at Johnson’s Nursery, we continue to grow many of the plants that he selected. In addition, we continue to honor Herbert Trautman’s legacy by always remembering his part in our history.