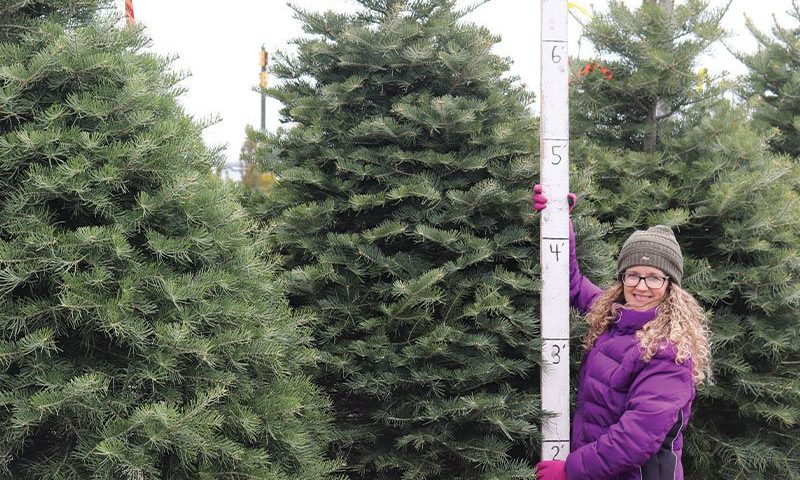 White Fir is an outstanding handsome, large evergreen with distinctive soft, blue-green needles. Its large cones mature to purple-brown, contrasting with the thick foliage. The best Fir for the Midwest, as long as it’s planted in well-drained soil.

White Fir contrasts with other evergreens due to its lighter needles. It’s an excellent alternative to Blue Spruce as long as your soils are well drained. Use it as a specimen tree or a component of a screen. Take care to not site next to busy roadways as the tree is moderately susceptible to ozone pollution.

As with Balsam Fir, White Fir seeds are an excellent food source for birds and small mammals. The dense needles give good cover to our avian communities. Squirrels and chipmunks can often be seen eating the seeds over winter.

Abies concolor has a symbiotic relationship with mycorrhizae fungus. When planting the tree, be sure to use a product to inoculate the soil with this beneficial fungus as it will improve tree vigor.

White Fir is beautiful when left alone, no shearing required. If you desire to raise the canopy, prune only during the winter months. Branches that are touching the ground can be removed to improve air circulation.

Although many trees will benefit from watering in extended drought, White Fir is adapted to the dry, rocky soils of the Rocky Mountains. Water only when there has been extensive drought, and water sparingly. Watering during the establishment period is still important, and care should be taken to make sure newly planted White Fir has enough moisture to establish good roots. Maintaining a mulch ring at the base is also beneficial as it reduces the need to water and slowly adds nutrients to the soil.

Abies concolor has few insect and disease issues. Armillaria Root Rot and Canker are not usually treatable and are best avoided by maintaining tree vigor. Occasionally White Fir will develop Blight (Diplodia, Sphaeropsis, and Sirococcus), Fungal Needlecast, Phytophthora Root Rot, and Rust diseases. These can be treated by a plant health care professional. Contact an arborist if you notice significant dieback or any severe changes in the health of the tree.

As White Fir is moderately susceptible to ozone pollution – do not site the tree near roadways with heavy traffic.

Early or late cold snaps may kill developing buds and foliage. The plant usually flushes through this dieback with no issues.

The thin bark of White Fir is susceptible to mechanical damage. Be careful when mowing or weeding around the trunk to prevent scarring the tissue

White Fir is native to the western United States with two distinct populations. One exists in California and the other in the Rocky Mountains. Its range is restricted by wildfire, but efforts of fire suppression during the 20th century have extended its range beyond pre-settlement levels. Although it performs best in full sun, White Fir is tolerant of some shade and will colonize areas that have not experienced fire in several years. It is commonly found with Quaking Aspen and Blue Spruce and has invaded Douglas Fir when there is extensive fire suppression.

White Fir will tolerate partial shade, which is what allows it to colonize other forests; however, its best growth and form is achieved in sites with full sun. In shade, it is more open and airier, and does not provide much screening value.

White Fir is drought tolerant and prefers dry soils. In the western United States, best growth was observed in years where annual moisture was below average.

As White Fir prefers low moisture and should not be sited with plants that have higher water requirements. Use drought-tolerant trees, shrubs, and perennials where you intend to plant White Fir. Some options would be False Blue Indigo, Butterflyweed, Bush Cinquefoil, or Black Hills Spruce.