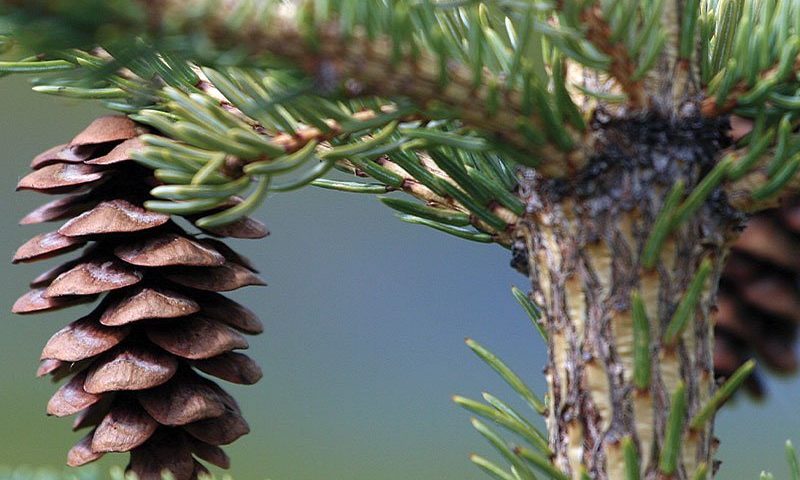 White Spruce is a moderately fast-growing native spruce with a broad, conical form. Its needles are an attractive blue-green, contrasting with its small, brown cones. This wide-ranging species is more tolerant of poorly drained and nutrient-deficient sites than other spruces but is intolerant of heavy urban pollution.

White Spruce is widely distributed across North America and is adaptable to many sites. It is tolerant of extreme temperatures, soil pH, and moisture levels. The dense form of White Spruce is well suited as a windbreak or screen and works well where soil stabilization is needed. This tree also excels as a specimen with its handsome blue-green needles. White Spruce struggles in areas of excessively high pollution or salt spray and should not be sited along busy streets or heavy industry.

White Spruce is a valuable nesting plant for many bird species. Expect to see Junco, Grosbeak, Crossbill, Chickadee, and Sparrow in the canopy feasting on the small seeds. White Spruce will bear good seed crops every 2-6 years in good sites. On poor sites, the tree may only bear good crops every 10-12 years. The cones are loved by the American Red Squirrel and are extensively cached by the animal. In fact, one silviculture manual states that seed collection can be made easier by stealing cones from an unfortunate squirrel’s cache. The fresh twigs and needles are a valuable source of vitamin C to many small animals during the winter months. White Spruce hosts the caterpillars of the Columbia Silkmoth.

Like all evergreens, White Spruce can suffer winter damage if fertilized incorrectly. Homeowners should avoid applying fertilizer in fall as this may cause a new flush of growth that will not harden off for winter. A trained plant health care professional or arborist can advise how to best apply fall fertilization. Alternatively, a maintained mulch ring will slowly add nutrients to the soil, avoiding the need for fertilizer application.

White Spruce can tolerate some shade, but this significantly reduces growth and density. For best results in a landscape setting, site this evergreen where it will receive at least 6 hours of direct sunlight.

Frost heaving and spring frost damage are more common on smaller trees. These issues can be mitigated by installing a healthy mulch ring around the rooting zone. Balled and Burlapped trees are less susceptible to this damage. When a late spring frost occurs, White Spruce will typically flush beyond the damaged needles as the season continues. Shearing is not necessary when the tree is healthy and properly watered. Once the tree has reached 12-20 feet in height this damage becomes negligible.

White Spruce has no significant insect or disease issues. When stressed, the tree may be susceptible to a variety of secondary insect and fungal diseases, including Sawflies, Spruce Budworm, Boring Insects, and Spider Mites. If you suspect these pests are attacking your tree, contact a certified arborist to identify the specific pest and develop a treatment program. Maintaining tree vigor is the best way to avoid these pests. Be sure to water the tree properly when there is less than 1” of rain per week and maintain a healthy mulch ring around the rooting area to keep moisture in the soil and to slowly add nutrients.

White Spruce is a highly adaptable species, typically found north of the Wisconsin-Illinois border to Alaska. It is tolerant of extremes in temperature, with one site in Alaska experiencing -65° F winters and 95° F summers. It has also been observed to grow in a wide range of soil pH, with sites ranging from 4.7 to 8.2 (the optimal range is reported to be 4.7-7). As the species is often adapted to the conditions of its source, it is important to source White Spruce locally – a tree adapted to the Central Sands of Wisconsin may not be tolerant of the alkaline soils found in Southeast Wisconsin.

Within its range, the species is commonly associated with Paper Birch, Quaking Aspen, and Balsam Fir. In Wisconsin, you may find White Spruce with Yellow Birch and Sugar Maple in more established forests. Historically, the native range of White Spruce has been limited by fire and flooding; both will kill young seedlings, and fire will kill young to intermediate trees. In recent years, fire suppression has contributed to a wider range for this tree. It was also heavily planted, along with White Pine and Red Pine, by the Civilian Conservation Corps to create jobs during the Great Depression.

White Spruce is a valuable tree in the forest products industry. Its relatively fast growth rate combined with its adaptability to many sites has made it a useful choice in plantations and reforestation efforts. White Spruce is also useful in restoration work as its roots contribute to soil stability and improve water quality.

Historically, White Spruce provided a wealth of benefits to Native American tribes. The roots were woven to create rope and the bark was used as a covering for dwellings. Boughs cut from the tree were used to create bedding.

White Spruce has been characterized as a shallow-rooted tree, susceptible to wind throw; however, the rooting habit is more often a result of site conditions, especially those where water tables are high. In these areas, the roots will not extend below the water table as they require oxygen for growth.

If using White Spruce for screening, plant with diversity in mind to avoid costly insect and disease issues. Use with Norway Spruce, Techny Arborvitae, Tamarack, and J.N. Strain Musclewood to provide year-round screening and fall interest.