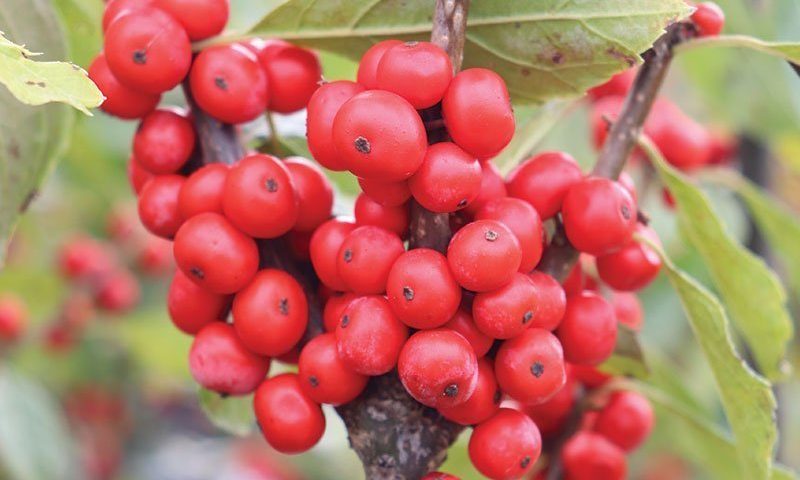 Common Winterberry is the Wisconsin native deciduous holly, variable in size. Commonly grows in damp areas throughout much of Wisconsin. Abundant bright red fruits hug branches on the female plants from fall into winter. Plant in groups – as both male and female plants are needed for fruit set. Prefers rich, moist, acidic soils. Has elliptic to obovate, toothed, dark green leaves that are 2-3″ long.

Easily grown in average, acidic, medium to wet soils in full sun to part shade. Adaptable to both light and heavy soils but will thrive in moist, acidic, organic loams. Winterberry has a good tolerance to poorly drained soils including wet boggy, or swampy conditions.

Winterberry is Dioecious, which means it has separate male and female plants. The flowers are relatively inconspicuous green-white in color and appear on new growth. One male plant will be sufficient in pollinating 6-10 female plants. If properly pollinated the female plant will give way to a crop of bright red berries, 1/4″ in diameter in late summer to fall. Berries are quite showy and will persist into/throughout the winter and often into early spring. Berries provide considerable impact/interest to the landscape in winter.

Winterberry must reach reach a certain age before they can be sexed. We offer unsexed (smaller/younger) and sexed (older – male and female) plants.

While humans are not able to eat Winterberry fruits because they are poisonous, they are extremely valuable to wildlife.

The flowers of male plants. Males are required for females to produce fruit.

Occasional disease problems include leaf spots and powdery mildew. Plants do poorly in neutral to alkaline soils where they are susceptible to chlorosis and often die, so make sure Winterberry is sited properly in more acidic soils that aren’t susceptible to drought.

Genus comes from latin name Quercus ilex for Holm Oak in reference to foliage similarities. Holm oak and many shrubs in genus ilesx have evergreen leaves. Epithet from Latin means “whorled” in reference to arrangement of sessile fruites in pseudo-whorls around stem. Common name comes from showy berries that persist throughout winter often into early spring. Branches with berries are commonly used in winter floral arrangements. Indigenous peoples have used parts of Ilex verticillata as a remedy for fever and skin ailments.